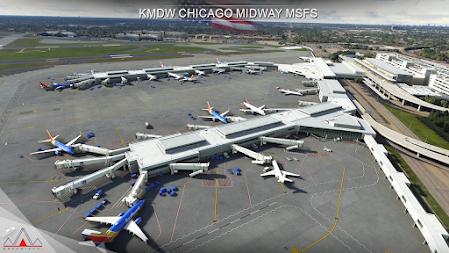 Midway International Airport (IATA: MDW, ICAO: KMDW, FAA LID: MDW) is a major commercial airport on the southwest side of Chicago, Illinois, located eight miles (13 km) from the Loop. Established in 1927, Midway served as Chicago’s primary airport until the opening of O’Hare International Airport in 1955. Today, Midway is the second-largest airport in the Chicago metropolitan area and the state of Illinois. Traffic is currently dominated by low-cost carrier Southwest Airlines; Chicago is Southwest’s largest focus city.

Midway is a base for Southwest Airlines, which carries over 95% of the passengers at the airport. The airport’s current name is in honor of the Battle of Midway. The Battle of Midway was a major naval battle in the Pacific Theater of World War II that took place on 4–7 June 1942, six months after Japan’s attack on Pearl Harbor and one month after the Battle of the Coral Sea. The U.S. Navy under Admirals Chester W. Nimitz, Frank J. Fletcher, and Raymond A. Spruance defeated an attacking fleet of the Imperial Japanese Navy under Admirals Isoroku Yamamoto, Chūichi Nagumo, and Nobutaka Kondō near Midway Atoll, inflicting devastating damage on the Japanese fleet. Military historian John Keegan called it “the most stunning and decisive blow in the history of naval warfare”, while naval historian Craig Symonds called it “one of the most consequential naval engagements in world history, ranking alongside Salamis, Trafalgar, and Tsushima Strait, as both tactically decisive and strategically influential”.