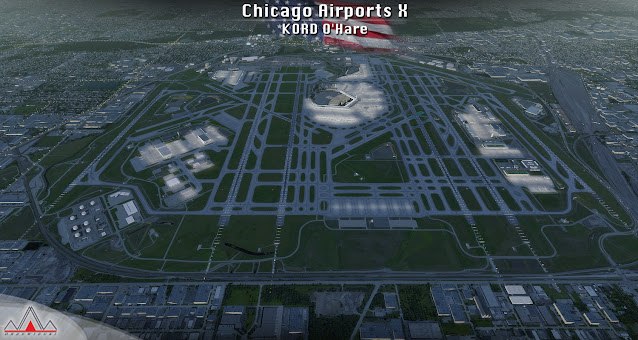 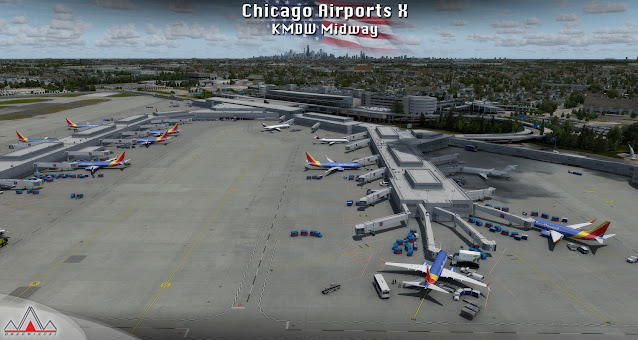 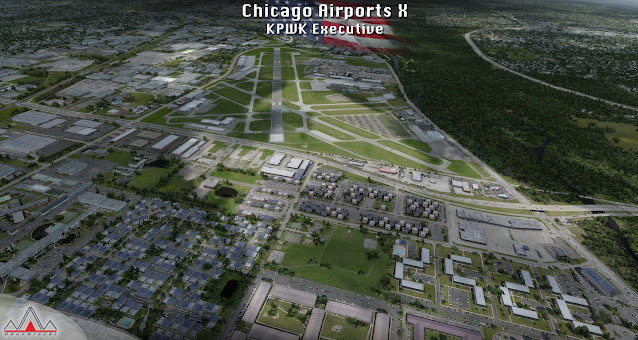 Chicago Airports X has been developed to provide the immersion into the Chicago area at a level never seen before. The product consists of three airports: KORD O'Hare, KMDW Midway and KPWK Executive. All airports have been developed using the most modern techniques. Great performance has been coupled with visual excellence but most importantly - tens of thousands of objects crucial for performing realistic flight operations, like signs, marking and lighting has been precisely implemented on a huge scale. Apart from must-have items, there are also hundreds of optional static aircraft, all terminals, towers and some hangars have interiors, there are custom animations, SODE jetways, advanced materials... All airports have up-to-date layouts including elements currently being under construction (check O'Hare). The product is designed to seamlessly blend with Chicago City X by Drzewiecki Design however each airport can be activated/deactivated individually for maximum compatibility potential.
K O R D   O ' H A R E   I N T E R N A T I O N A L   A I R P O R T
O'Hare International Airport (IATA: ORD, ICAO: KORD, FAA LID: ORD) is an international airport located on the far Northwest Side of Chicago, Illinois, 14 miles (23 km) northwest of the Loop business district, operated by the Chicago Department of Aviation and covering 7,627 acres (3,087 ha). O'Hare began as an airfield serving a Douglas manufacturing plant for C-54 military transports during World War II. It was named for Edward "Butch" O'Hare, the U.S. Navy's first Medal of Honor recipient during that war. Later, at the height of the Cold War, O'Hare served as an active fighter base for the Air Force. As the first major airport planned post-war, O’Hare's innovative design pioneered concepts such as concourses, direct highway access to the terminal, jet bridges, and underground refuelling systems. It became famous as the first World’s Busiest Airport of the jet age, holding that distinction from 1963 to 1998; today, it is the world's sixth-busiest airport, serving 83 million passengers in 2018. O'Hare is unusual in that it serves a major hub for more than one of the three U.S. mainline carriers; it is United's largest hub in both passengers and flights, while it is American's third-largest hub. It is also a focus city for Frontier Airlines and Spirit Airlines. While Terminals 2 and 3 remain of the original design, the airport has been engaged in a massive modernization of the airfield, and is beginning an expansion of passenger facilities that will remake it as North America’s first airport built around airline alliances.
K M D W   M I D W A Y   I N T E R N A T I O N A L   A I R P O R T
Midway International Airport (IATA: MDW, ICAO: KMDW, FAA LID: MDW) is a major commercial airport on the southwest side of Chicago, Illinois, located eight miles (13 km) from the Loop. Established in 1927, Midway served as Chicago's primary airport until the opening of O'Hare International Airport in 1955. Today, Midway is the second-largest airport in Chicago metropolitan area and the state of Illinois. Traffic is currently dominated by low-cost carrier Southwest Airlines; Chicago is Southwest's largest focus city. Chicago Midway International Airport covers just over one square mile (650 acres or 260 hectares) and has five runways. Midway is surrounded by buildings and other development, so the landing thresholds of the runways are displaced to provide obstacle clearance. The FAA and the airlines ensure safety by adhering to calculated load limits and various weather minimums. Because of the displaced landing thresholds, the runways have shorter distances available for landings than for takeoffs. 13C/31C, the longest runway, only has an available landing distance of 6,059 feet (1,847 m) in the southeast direction, and 5,826 feet (1,776 m) to the northwest. The largest aircraft normally seen at Midway is the Boeing 757.
K P W K   C H I C A G O   E X E C U T I V E   A I R P O R T
Chicago Executive Airport (IATA: PWK, ICAO: KPWK, FAA LID: PWK), formerly Palwaukee Municipal Airport, is a public airport 18 miles (33 km) northwest of Chicago, in the village of Wheeling in Cook County, Illinois, United States. The airport logs over 77,000 take-offs and landings each year and is the fourth busiest airport in Illinois. The airport covers 411 acres (166 ha) at an elevation of 647 feet (197 m). It has three asphalt runways. For the year ending July 31, 2014 the airport had 77,321 aircraft operations, an average of 212 per day: 83% general aviation, 17% air taxi and less than 1% military. In June 2017, there were 194 aircraft based at this airport: 105 single-engine, 22 multi-engine, 62 jet and 5 helicopter. The airport can handle executive jets in the 20-seat range, such as the Grumman Gulfstream and the Bombardier Challenger, and larger aircraft occasionally visit. Occasional military transport aircraft, such as the Lockheed C-130, use the airport when carrying service members to local facilities such as Great Lakes Naval Training Center or the North Chicago V.A. Hospital.
I N S T A L L A T I O N
The product will be automatically added to the Flight Simulator Scenery Library. Our installer provides you additional optional features during install. To select different options, simply run the installer again. Uninstall instructions are provided in the manual.
S C E N E R Y    F E A T U R E S
3 high quality airports included: KORD O’Hare, KMDW Midway and KPWK Executive in the most up-to-date versions possible, including new/extended runways and taxiways at KORD and terminal extensions in Midway.
Extensive though performance-friendly interior modeling at all terminal buildings and some hangars
Highly advanced performance-friendly design, numerous optimization techniques used, the Lite Texture Pack provided for 32-bit platforms
Custom KORD charts, custom animations, SODE jetways, advanced materials, hundreds of optional static aircraft, dynamic lighting.
Credit @AVSIMADDONS