Product information "US Cities X - Cleveland" From an aviation point of view Cleveland is the most thrilling city in this series s... 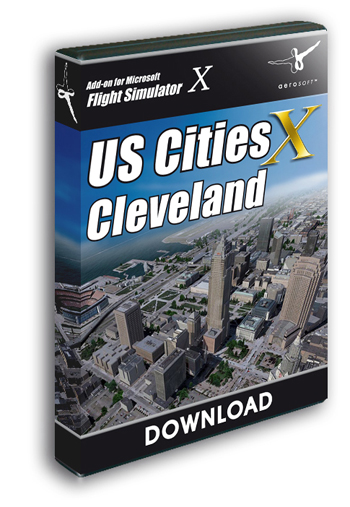 Product information "US Cities X - Cleveland"
From an aviation point of view Cleveland is the most thrilling city in this series so far. Take off from one of the last downtown airports in the US and test your abilities as a pilot doing some island hopping on the Lake Erie Islands.
For pilots Cleveland is among the most fascinating cities in the US. Unlike Chicago it still has a Lakefront airport that is so insanely close to downtown that an approach there offers quite a lot for your eyes. Let it be the Browns Stadium, the Science Museum's wind turbine or the Lakeshore Power plant that are just a few feet from the glideslope or the stunning views at those skyscrapers and many bridges crossing the Cuyahoga River. Last but not least the Lakefront Airport is well-known for the annual Cleveland National Air Show that takes place there.
Of course that's not all. As with most other US Cities again we have added some more bonus content like Perry’s Nuclear Power Plant to the east (a perfect waypoint for flights from the Niagara/Buffalo area) plus a complete island hopping scenery of the US Lake Erie Islands, of which most have their own airports in various sizes. The islands are also a nice stopover for flights from Chicago or a touristy holiday destination during the summer months. They are featuring a massive 315 feet tall peace memorial overlooking the islands.
Features:
Aerial image coverage with up to 15cm/pix resolution (see attached Google Earth file)
Bonus: Complete island hopping scenery covering the US Lake Erie Islands!
More than 640 major buildings included
45,935 autogen objects placed realistically
Highly detailed and customized mesh terrain
Many detailed bridges with traffic crossing the Cuyahoga River 2 crossing a valley along the Cleveland-Hopkins Rwy 10 approach
4 heliports in good detail
Major airports in and around the city as well as the islands are covered with new high res ground images with customized mesh terrain (no new building structures added):
Burke Lakefront
Cleveland Hopkins International Airport
Cuyahoga County Airport
Kelley’s Island
Put-In-Bay
Middle Bass Island
Middle Bass Island East Point
Rattlesnake Island
North Bass Island
Sound effects like downtown- and highway traffic and animated gulls
Animated ship traffic and ferries between the islands
Traffic on most major roads
And another small bonus: Perry Nuclear Power Plant with Helipad and animated smoke that turns in wind direction
Low price, very good value for money
Official purchase and download from Aerosoft
https://www.aerosoft.com/us/flight-simulation/continents-sceneries/north-america/449/us-cities-x-cleveland
Or
DOWNLOAD