Antarctica X is one of the most technological advanced sceneries ever created. It covers the complete continent (as far as FSX allows) and w... 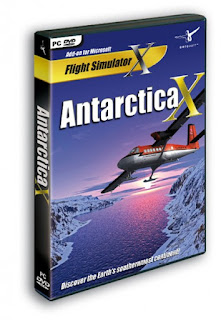 Antarctica X is one of the most technological advanced sceneries ever created. It covers the complete continent (as far as FSX allows) and will get you as close to flying over the Antarctic as possible.  The landscapes you will encounter are breathtaking and show this continent in all its majestic beauty.
A major problem for this project was getting access to the data as there are so many countries involved and many feel the geographical data has strategic importance. Only after the developer got into contact with pilots and scientists who were actually in Antarctica things started to move forwards.  Dozens of databases had to be combined and often these only existed in the paper format and had to be manually digitized. Often databases conflicted and details had to be found elsewhere.
Getting the aviation related information was easier but even here it was hard to find out what the real pilots are using. The respective organizations and pilots usually prefer to keep that information to themselves because (fuel/food/emergency-) supplies are very limited and therefore they don’t like anyone who’s not part of their select company to fly there. Without aviation there would hardly be people in Antarctica. It is a continent for those that dare to fly in extreme conditions and those that found Lukla and similar airports getting too boring.
The whole continent is covered by custom landclass data combined with Landsat satellite imagery. For many locations we got additional images that were painstakingly rectified and fitted in. The result is that this scenery is in many ways superior to datasets that are used by airlines and geographical institutes. As far as we know this is the first time many of these databases are combined. You will not find a better altitude model that’s more details or better photo coverage. Perhaps organizations like the CIA got something hidden but we doubt that.
Added to this scenery is one of the Twin Otter that has been a favorite for tens of thousands of customers, which is also the most widely used aircraft in Antarctica. You get the landscape, the aircraft and the extensive and detailed manual to get you started.
Features:
The whole continent (as far as the simulator allows) in high definition terrain mesh, high detail aerial and satellite images and a coastline with millions of floating ice sheets
7 major research stations included in very high detail:
McMurdo (USA)
Rothera (United Kingdom)
Sky Blu (United Kingdom)
Neumayer III (Germany)
Casey (Australia)
Scott (New Zealand)
Sanae IV (South Africa)
A total of 47(!) runways/skiways and helipads all over the continent in various detail grades from the Russian hub to the newest Chinese skiway at an altitude of more than 13,000 ft (see manual)
3 extremely detailed icebreakers with helipads running on scheduled routes:
RV Polarstern (Germany)
USCGC Healy (USA)
Fictious Icebreaker (we call it the MS LimeSim…)
Many special (sound) effects and animations
Created in cooperation with Antarctic researchers and pilots
Includes a ski equipped DHC-6 Twin Otter, the ideal aircraft for the rough terrain (it’s the only continent without a single paved runway – although even larger airliners do land there!)
Special tool to change season and settings
Flightplan files based on real world flightplans
Extended and detailed manual that includes many ideas for flights and several chapters on flying in Antarctica written by a pilot 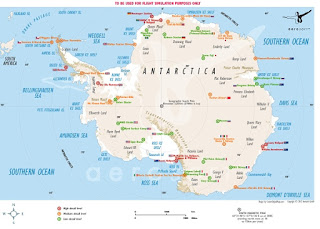